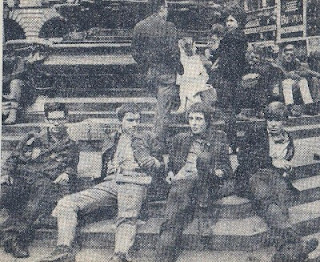 Back in 1965 the Evening Standard ran this:

Everybody Has Seen Them …
So Few Know Them

By your second day of sitting in Piccadilly you’ve stopped demanding to know who are all those people sitting around Eros?”  For a start they’re you and Moloch. And Peter and Geoff, and the boy from the Bahamas who reads William Tell in German all day, Luis Carlos, from Lisbon, and the rest of the semi-regular Eros islanders.

Lovely Lynne will be along later.  The Yorkshire miner who was so generous drunk last night that his Haig bottle orbited among us so fast he had to run to keep up with it, is certainly sleeping it off until he can summon up the first of his daylong chorus of “Eee, ain’t life grand!”

Vigilant
The plainclothes man is there again looking bored and vigilant- - which is what marks him off from the rest of us since we’re neither bored , nor vigilant.

The pigeons are there, of course, though you can never be sure with pigeons that they’re the same ones.  And there is a cast of hundreds with walk-on parts who just walk on the island, circle it, and walk off again.  You soon feel very safe on the island, although it can cost you your life getting on it.  Occasionally you see other would-be islanders running terrified among the traffic, baffled by those unbroken stretches of railing trying to reach the safety you are enjoying.

The traffic, after an hour of sitting there, stops being noisy and becomes simply a series of hostile stares.  They just hate you for being there, lounging and idling while they’re working.

Affront
You just go to pieces marooned there. You spread papers about, scratch, stretch, flop, gangle, open bottles and sleep.  You are an affront to London, particularly to the taxi-drivers who, it has been estimated, circle Eros six times in every shift – and they show it.  But after another hour you don’t even notice that.  After all, they are mere transients, you belong.

Moloch blows the cow’s horn he bought for a pound in Watford. It is as plaintive and primeval as he wants it to be.  He is 19, a nice quiet boy from Cardiff who wears wide hunter’s hat, pouched leather belt, armlet of white hide, white hide trimmings to his jacket, a heavy charm on a leather thong round his neck, a bracelet and three rings.

He is called Moloch after the Hebrew god to whom children were sacrificed because he has a “reputation for being cold and heartless.”  Inspired, and perhaps flattered by this, he has covered himself with Moloch images, including the huge charm round his neck that he made from fire tile cement.  “Peter calls it my biscuit, because he is obsessed with the idea that everything is for eating.”

Exodus
Peter, his friend, wears a fez, a Jew’s harp round his neck and carries an ocarina, three harmonicas and two whistles.  They, and Geoff, the third of them, have made what they call an “exodus to sanity,” which means living largely on nothing and sleeping in the parks.  Peter has written a poem about sleeping out in Hyde Park.

He takes out one of his harmonicas, licks, pretends to bite it as though it were a bar of chocolate and plays Ripley’s Blues wastefully and unimpressionably into the traffic uproar.

Two little Cilla Blacks from Liverpool ask if they like the Beatles.  “You don’t We’ve seen Help ! 25 times,” they scream.

Lovely Lynne who is two yards tall and has a yard of lovely young brown hair, takes over the harmonica and plays.  Lynne lives by sketching other Eros Islanders for three shillings a time.

Her tight old jeans are smeared with paint, her small pale perfect face is weighed down with eye make-up.  Together they discuss cheap places to eat and stay, emigration to Australia, going to Africa, their hatred of society.  Near them stretched out insensible and stinking, is a tramp, round whom the short-term islanders tread with concern and caution.

Kings
“They’re the kings, those old boys.  Live free.  More of a man than all those office zombies,” says Moloch shedding affection all over the deep, rotten, needy sleep of the tramp.

The drunken Yorkshire miner is trying to persuade everyone to go to Belgravia with him.  “They’re smashing there, treat you as an equal.  Are you going grouse shooting?” he says imitating an upper-class soprano.  Luis Carlos from Lisbon, wearing an enormous pair of wrinkled jeans and “je viens de Portugal” on his pocket confesses he lives on cornflakes and milk but loves London.

The sun sinks over the Café Royal, as it has risen over the Criterion.  The Eros fountain like some ghastly Victorian weed with its bulb showing is surrounded by explosions of neon instead of the daytime junkyard of buildings that no one can decide what to do with.  Patiently, steadfastly, uncritically the islanders sit on …

Check the photo above.  Which one is Peter Finch?