The much-faded and painted advert for Guinness on the side of the Vulcan has been there since at least the 1960s. Back then this typically Cardiffian tavern was on the edge of a neck of tight working-class tenements, just the other side of the rail track from the recently slum-cleared district of Newtown. Cardiff was a dirty place, full of smog and dust. The sprawling steelworks of East Moors and the docks to their south provided a stream of men seeking sustenance and oblivion. In the Vulcan you sat on wooden benches in working boots and working clothes. There was sawdust on the floor.

Today, fifty years on, Newtown is a memory – replaced by industrial units and a corporate hotel. The docks have been anodised, reduced to a safety-conscious ghost of their former selves. East Moors is the Ocean Way Industrial Park, full of warehouses and articulated lorries. Even the terraces that once surrounded the Vulcan like ivy have been flattened and turned into a clean, black-topped car park.

When I first discovered this 1853 pub it still had the legendary sawdust and was still a home for working men. Railway workers, engineers from BT opposite, prison guards, locals from Duffryn Street, Taff Street and Pellet Street. I sat there with John Williams, the author whose anthology of short fiction Wales Half-Welsh (Bloomsbury) almost got titled Vulcanised. We were joined by a bunch of other writers who felt more at home here than in the aluminium and glass vertical drinkeries of Cardiff’s town centre. (If you’d like to follow this up then you can read more about the writers and the Vulcan in my Real Wales, published December 2008 by Seren). 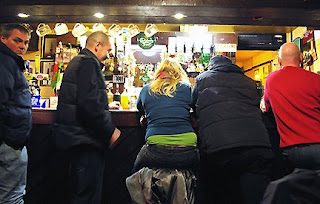 The beer was good, there was a dart board, the juke wasn’t intrusive. Liz, the landlady, offered regulars bowls of chips and complimentary sausages.

But then came the University of Glamorgan putting a tank on Cardiff University’s lawn by converting the old BT building into its splendid new Atrium over the road. The School of Cultural Studies. Library, students, light. The Pellet Street tower block of student flats (Ty Pont Haearn) went up at incredible speed. After that came St David’s 2 and the need for car parking. The surrounding streets were systematically flattened yet the Vulcan survived. A pub in splendid isolation. A Victorian gem for fans or a planning difficulty for developers. How you viewed it depended on where you stood.

Currently rumours abound. The pub will be pulled down next spring. Brains have sold out. In its place will be a multi storey car park, social housing, another student tower block, bars, restaurants, even Atrium 2, symbol of Glamorgan’s unstoppable sweep to domination. There’s also a half-credible tale that St Fagans will purchase the bricks and rebuilt the pub, restoring it to its Victorian splendour in the heart of the museum. Iorwerth Peate would spin.

It is a function of developers to sweep all before them. Cardiff has seen generations come and go, each cleaning the slate of everything. The city today has almost nothing with a past. If you exclude the Castle and St John’s Church almost everything standing is recent. We should preserve the pub by building round it and incorporating it into the overall plan. It has happened before. Check the retained Victorian frontage of the Altolusso block a few hundred yards on up the road. We should retain the Vulcan’s charm, its tourist attractability (it’s in the top fifty best UK pubs, according to Camra, the Campaign for Real Ale) and its delight. Removing it even to the secure and beerless pastures of St Fagans would be a crime.

Possibly the only good thing to come out of the present economic breaking halt is that new construction is almost universally on hold. Which should mean a reprieve for the Vulcan. For a time. Let’s hope.

Photo by John Briggs. An earlier version of this blog appeared at the IWA
Posted by Peter Finch at Saturday, November 29, 2008 No comments:

Real Wales, the new book, will be launched at the Cardiff Visitor's Centre, The Hayes, Cardiff. The Visitor Centre is the Old Library. The event will run from 6.30 pm. There'll be wine and readings and Peter Finch will be in conversation with the journalist, author and broadcaster, Patrick Hannan. The book is published by Seren at £9.99. expect it to hit the shops in the last week of November.

This has been a long haul, this one. Books are never instant things. But expect to be informed, stretched, wound up, entertained, taken palces and amused. Some places in Wales will never want to see the author again.
Posted by Peter Finch at Monday, November 10, 2008 No comments: