Roaring Down The Motorway 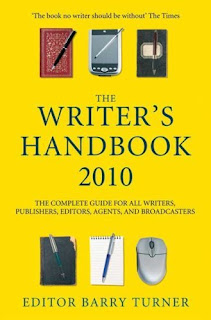 Setting off on a career as a writer without checking how things work is a little like driving a car without reading the handbook. You’ve got the talent and the push. It’s in you and it has to come out. You are into fifth gear before you know it and roaring down the Motorway with a grin on your chops. But if you’d bothered to read up before you flew then you’d be able to set cruise control and adjust the air con. You’d know how to change the music from the steering column. Would know where the heated rear window button was, and, come to that, might have checked your tyre pressures and understood that this has a diesel engine which didn’t run on unleaded, the stuff with which you were now about to fill up.
One of the last things many new writers buy is the annual Writer’s Handbook from Macmillan. At £14.99 a go you can see why. Yet this yellow doorstop compendium of advice and addresses makes pretty essential reading. If you expect to go anywhere other than the end of the street with your stuff then you really should consult it.

The new 2010 edition has just appeared and covers everything from UK and USA publisher listings to prizes, details of literary societies, listings of agents, regional newspapers, TV producers and information on those swirling pools of misinformation, electronic publishing and the future of the book.

There is also a timely piece on how not to write a novel. “The myth of the lonely, misunderstood writer against the world, destined eventually to emerge triumphant, endures partly by virtue of the occasional exceptions that prove the rule.” The reality is that most failing writers will continue to fail. The big lottery of metropolitan success and bestsellerdom sits out there like gold at the end of the rainbow. You turn up at the corner shop each week and buy more tickets. But you never win. “As a writer you only have one job: to make the reader turn the page.” And to that I’d add that first of all you have to make them pick up the book.

Are there too many writers out there? Maybe. But the activity can generate desirable feelings of self-worth and, for many, do something to fix and explain why it is that we are what we are. Literature can be life enhancing. Buy the Handbook. Let’s have more.
.
A version of this post appeared as The Insider in the Western Mail of 15th August, 2009
Posted by Peter Finch at Saturday, August 15, 2009 No comments:

Wanting To Be Famous Again

How famous is Cardiff? We like to think the world now knows just who we are. Capital of Wales, Millennium Stadium, Singer of the World, and an iconic poem across the front of the WMC. That’s quite a fair step on from Clark’s pies and coal in the streets. But you try it in California or Texas or even, for that matter, some parts of Europe. Cardiff? Never heard of that place. There’s still a way to go.

In Swansea, which ought to have an even larger problem given that they are half the capital’s size and merely the country’s second city things are managed with less desperation. Wales’ tallest building is already in place and the Dylan Thomas Prize, £40K for the best book in English by someone under 30, brings the world to their doors. Around the world Dylan’s name still works.

But back in the Capital all is not lost. The annual Academi Cardiff International Poetry Competition, £5000 for a single poem of less than 40 lines has just been awarded. Aboard one of the glass-topped Bay cruisers, laden this time with orange juice, poets and glasses of wine, Jane Routh walked away with the big cheque. National Poet Gillian Clarke presided, told us of her childhood sneaking down the Ely subway and walking along the Castle’s animal wall. Read us poems about Obama and the Stadium. Pulled Cardiff and verse closely together.

The Cardiff International Poetry Competition, backed by the Council is in its twenty-fifth year now. As a money prize it ranks around third in the UK and attracts a huge entry from all over the world. Bards on Honolulu and Cape Town send in their stuff. So, too, do poets from Ponty and Ely and Roath. The big selling point with such contests is that nobody’s name is revealed until the judging is done. Work gets read for its quality rather than by whom it might have be written. It’s an appealing prospect, especially to those who are convinced that publishing is entirely run as a conspiracy by a self-selecting elite. Poetry Competitions are equitable, straightforward, fair.

The 2010 competition is to be judged by the new editor of Poetry Wales, Zoë Skoulding and the woman who was running right behind Carol Ann Duffy in the race for the Poet Laureate, Jackie Kay. Entering costs £6 a poem with entry forms available from the Academi. Check online at www.academi.org or send an sae to P.O. Box 438, Cardiff CF10 5YA, Closing date is 29th January, 2010 which gives loads of time but early entries have an excellent chance.
Tips on winning? Read as much poetry as you can. Read the work of the judges. Send your best. Try sending in more than one example. Hope.

A version of this post appeared as The Insider in the Western Mail of 8th August, 2009.
Posted by Peter Finch at Tuesday, August 11, 2009 1 comment:

Wales and Its National Poet

How much of a mark do National Poets make? Wales’s first, Gwyneth Lewis, has a poem right across the front of the Wales Millennium Centre. Gwyn Thomas, the ebullient second, has words in the stones on the top of Snowdon. The seemingly unstoppable Gillian Clarke, the current National bard, has her work in the landscape at Barry and soon at Ebbw Vale and in the mouths and minds of nearly every Welsh school child. National Poets celebrate, concentrate, and elevate. They take poetry where it should go, out there to the people. They are ambassadors as much as they are creators. In their hands poetry becomes something we all own.

There may, however, be probles up ahead. In England, where the Poet Laureate was once a job for life and in its present incarnation still lasts for ten years, they have a population approaching 60 million and a pool of poetic talent as large as France. Once you’ve done your stint you get knighted. Arise Sir Gwyn. But in Wales that’s a fantasy – we have no civic honours of our own. Yet.

The real difficulty is our level of turnover. We are using up poets at the rate of one every eighteen months. It’s even faster with the National Children’s Poet, Bardd Plant, where the post-holders change on an annual basis. Our population is a mere three and a half million. Now I know we are a pretty talented people and have poetic ability well above the world average. But if we carry on as we are we are still going to run out fairly soon.

Currently the National Poet has world-wide recognition. Due in part to Gillian’s charisma, energy, talent and ability to put herself about the international stage the world knows of Wales. That’s a harder thing to do when you change language. Would the role of National Poet be less visible if its highspots came from the Welsh tradition? In the sequence we are following the next National Bard will be one who writes first in the older tongue. Will it matter that such a poet will be unknown outside our borders? Can the Wales of today really sustain a National Poet who works in one language only? On the other hand should not the National Poet be competent in both? And how many of those are there about? Even the late R S Thomas, language campaigner from the front lines, only ever delivered his verse in Saesneg.

There are arguments here for picking a winner and then extending the period of service. How different might things be if Gwyn Thomas, Gillian Clarke or Gwyneth Lewis had been appointed for five years, for ten or even for life? If you have a view please let me know.

A version of this post appeared as The Insider in the Western Mail of 1st August, 2009
Posted by Peter Finch at Saturday, August 01, 2009 1 comment: