Poems come to me in batches, like buses.  You’d think that after all these years I would have learned how to turn the taps of creativity to make them spread themselves out like real work, like a job, a 9 to 5.  Get up, write the poem, then get on with other parts of your life.   But poems are not really like that like that.  All too often they come in darts and crashes with gaps as long as a country mile in between.

When I edited a literary magazine I regularly chased the late Dannie Abse for a contribution.  He was from Cardiff originally and strode large on the UK literary stage.     As a fan of Cardiff City football club he regularly returned to the Welsh capital and was well disposed to what I was trying to do with Second Aeon.  He’d suggest people I could ask, commented on the quality of what I’d already included and generally enthused.  But when I asked him to contribute a poem of his own he always found some excuse for not doing so.  “I’ll send you some at the end of the summer”.  But he never did.

Eventually I cornered him at a launch at Lears bookshop at the end of the Royal Arcade and he admitted that as poets go he was an incredibly slow composer and simply didn’t produce enough new material.  Demand always outstripped supply.  “I’ll try”, he said.  After the passage of what had to be a good six months he finally gave me The One Prayer, a poem about god and that perennial for poets, death.  I included it in issue 16.  Dannie Abse at last in there, in the company of William Burroughs, John Ormond, William Wantling, Edwin Morgan and Pablo Neruda.  It was an eclectic mix. 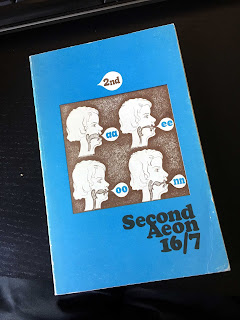 I used to worry about my own output.  Was I writing enough?  Why hadn’t I manage a new piece this week.  In the days of the weekly performance poetry explosions in Cardiff during the 1980s this need for a regular supply of new material became acute.  The stage was such a critical place.  If you were on it with any regularity then reciting your greatest hits simply wouldn’t hack it.  Your audience expected to be constantly entertained anew and not simply given reruns of stuff they’d already heard.
I’d sit in my room banging hard the keyboard of my Alan Sugar Amstrad  for hour after hour in the hope that something worthy would eventually emerge.  Occasionally it did, too but what a stretch of dross lay in between.  The key is to own an Ernest Hemingway built-in, shock-proof, shit-detector.  Shove everything into it and expect most of it never to re-emerge.

These days now that the world’s poetry fury has subsided and to a degree I have less to prove I worry less.  If the page is blank and there’s nothing arriving to fill it then I move on to something else.  Psychogeography.  Essays about music.  Reviews of new books.  Blogs about the NHS.  Cleaning the car.  Rebuilding that falling down wall.

There are plenty of techniques for making yourself write when you don’t want to or don’t think that day you have anything significant to say.  They should be used with care.  My view is that the world   is now oversupplied with poetry.  Production has been on the increase steadily since Victorian-era publishing for the masses brought verse to the wider world.  What we don’t need this morning is yet another new volume  that will languish on the bookshop shelves unsold, unselling, unlooked at until stock check stock clearance consigns it first to the bargain bin and then the pulpers.  Who reads this stuff?  Admittedly more now than did decades back but never enough for the bestsellers.  Verse remains a Cinderella art.

How many digital copies of your latest book of shouting poetry have actually been downloaded? Does your poetry-filled blog get consumed by thousands of fans?  Probably not.  And while we are on the subject why does everyone interested in poetry also seem to write it?  I paint a dark picture. The poetry world is often brighter than this.

If you are sitting there and want to poem to come but it won’t you could try automatic writing.  You could cut up some great work and see where the joy of random discovery will take you.  Will the banging together of words and phrases that previously never sat anywhere near each other now draw fruit?  If not then you could try intertextuality, the taking of the work of another and using it as the base for something of your own.  The problem here is ensuring that what eventually emerges is your own and not simply a retread.  Many poets including some of the famous have run foul dabbling here.
Failing everything then a walk in the stiff air and a look at the shape of the clouds is often enough to set the spark flaring.

I sometimes revisit my earlier books, the ones that are more than 20 years old and lost to me now back in the swirls of time and wonder  how  on earth I ever composed like that.  Did those things happen?  How did they?  What motivated me?  Was it all a fluke?  How could I ever do this again?  I puzzle.  I worry.  Then after a while I don’t.  Instead I look out the window at those clouds, still up there in glory, moving, not moving, full of colour, all dark, all white.
Posted by Peter Finch at Tuesday, September 12, 2017

Nice Peter, i echo much of this, especially too much (bad) poetry in the world.

Having just written the obligatory birthday poem, I am reminded how perceptive Peter's comments are. And yes, I stuck a cloud in. There's no urgency, no life or death drive. But it's great when you finish something, whether it's any good is another matter (it's not) just to finish a poem is so satisfactory. Until I read it again tomorrow. Keep watching the clouds Peter.

I have just found this blog and am finding it interesting. For eighteen months I have been writing a Daily Page - one A4 page of fictional prose - and if I am stuck for a topic, I often begin with a phrase or sentence. I hear it in my mind. Hearing it tells me who is saying it, why, in what context, to whom. Then I am away. I have sometimes done the same thing with poems. The voice is the great starting point for me.